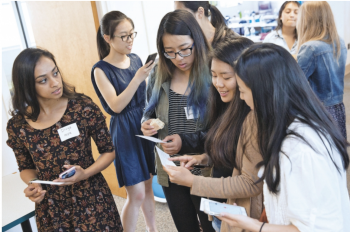 DTech started in 2016 as Duke’s response to a decades-long problem: a dearth of women working in tech. In 2015, women held only a quarter of the nation’s computing jobs, though they made up 57 percent of the work force, according to the National Center for Women and Information Technology. As recently as 2004, just 10 percent of students who intended to major in computer-science at four-year colleges were women, though the number has since been rising, according to the Higher Education Research Institute.

But there are people who are working to encourage more women to enter the field. One is an anonymous Duke parent from Northern California who donated $1.5 million to fund the university’s DTech program. So far, Duke has seen some success. Almost all 41 women who have participated in the first two years were offered another internship, and many were offered jobs upon graduation. Next summer Duke expects to expand the program and include a cohort of underrepresented minority students.