Finding Her Way - A Scholar's Journey to Working at Apple 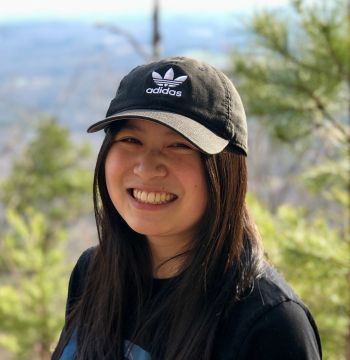 During the spring of her senior year, Felicia Chen ‘20, DTech alumna, found herself at a crossroads. Torn between joining a startup or a large technology company after graduation, Chen reflects on the large decision that stood ahead of her at the time.

“I was ungodly stressed. Upon graduating, I wasn’t super sure where in tech I wanted to work. I didn’t have much experience on the software side at all,” said Chen, who is now a software engineer.

Chen had an unconventional journey to Silicon Valley. Unlike many other software engineers who had been planning their careers in technology for years, Chen had only decided to pursue a career in the technology sector during her final years of college. Her relative inexperience made it difficult to decide on where to apply her newfound technology skills with certainty.

“I was trying to hash out the ‘optimal’ career path. I was worried that if I made the wrong choice, I'd be closing doors for my future self,” Chen said.

After some deliberation, Chen decided to work as a software engineer at Apple.

“Overall, it’s been a great experience. It’s been an incredibly supportive environment for learning. I’ve definitely grown a lot as a software engineer and highly recommend anyone to come join,” Chen said

DTech, or the Duke Technology Scholars Program, played a key role in Chen finding her “true north” in her current role at Apple. DTech focuses on supporting under-represented people in the world of technology through community building, mentorship, empowerment, and hands-on experience. Chen is just one example of how DTech successfully empowers under-represented demographics to find their way within the technology industry.

Chen had spent her first two years at Duke sampling a myriad of majors.

“I ran the whole gamut. I came in as a math major. I realized that I liked math, but didn’t love it. I thought that I wanted to do data science at that time because that was more of a natural bridge between math and statistics,” Chen said.

But when data science also didn’t fit her interests, Chen decided to pivot to finance during her sophomore year. Working in banking was not all that she had hoped it would be.

“I absolutely, absolutely hated my job. In fact, I disliked it so much that I decided to automate one of my banking tasks in my free time. I ended up realizing that the favorite part of my job is something that is not my job,” Chen said.

It was here that Chen discovered her passion for software engineering. Through working in a job that she disliked, Chen found what she loved. Determined to pursue this newfound passion, she taught herself to code.

“I was coming fresh out of the finance industry with little software engineering experience,” said Chen. “DTech has been great in terms of empowerment, exposure and networking. … I felt like I had to play catch up especially since it seemed like everyone has been coding since middle school or high school,” Chen said.

Nonetheless, Chen’s hard work and determination paid off when she was offered a summer internship at Apple. During the fall of her junior year, Chen discovered DTech through a friend who had participated the previous summer.

DTech played a crucial role in Chen’s ability to make the decision between working at a smaller start-up or taking a job at Apple, one of the largest technology companies in the world.

“When I was debating whether to join a start-up or large tech company after graduation, I was able to make a more informed decision by talking with DTech alumni and mentors—it was immensely useful to hear from others who'd been through similar situations and had more work experience,” Chen said.

The program allowed Chen to get a taste of Silicon Valley before deciding where she would work. The guidance that DTech provided allowed her to decide whether to work at a start-up or at a larger company upon graduation.

“At a big company, my goal going in was to learn how to properly code by working at a larger enterprise. It doesn’t hurt to have a bigger company, like Apple, on your resume for the first two years - it’s a lot easier to make that switch than the other way around,” Chen said.

Felicia is currently working as an Evolve Rotational Program Engineer, which allows her to switch on to a new project team every six to eight months.

“I started in August of 2020, so I’m wrapping up my first rotation. Overall, it’s been an incredibly supportive environment for learning,” said Chen. “I’ve definitely grown a lot as a software engineer and highly recommend anyone to come join!”