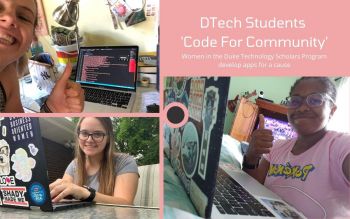 This summer, the Duke Technology Scholar program launched HackDTech, a hackathon through which nearly 60 young women gained coding experience and raised more than $5,000 for dozens of organizations working toward racial justice.

The DTech students, divided into 18 teams, rose to the hacking challenge putting their heads together – virtually -- to develop creative and socially conscious mobile apps, in only 24 hours.

Quickmed, an app that helps chronically ill patients track symptoms, Text for Local Impact, a chatbot that grassroots organizations can use for marketing, and Black Shops Matter, a Chrome extension that directs users to black-owned stores, stood out among a panel of DTech alums and mentors. The teams were judged on factors such as ambition, design, and functionality.

HackDTech was the brainchild of DTech Scholar and computer science major Anna Darwish, ‘21, who was a DTech Scholar in Durham last summer, pre-pandemic.

“I hoped to create a low-stress space where women in DTech could get to know each other and become more confident in their abilities to work with new people, try new technologies, and present their ideas in a creative way,” Darwish said. “A lot of the ‘HackDTech’ hackers were trying this for the first time, but you wouldn’t be able to guess from their incredible projects.”

Darwish wanted to focus the hackathon on supporting Black lives because “STEM organizations at Duke, including DTech, have a far way to go in becoming more inclusive.”

The majority of the funds went to the top three teams’ organizations: Black Table Arts, The Okra Project, and Black Women’s Health Imperative.

Under the stress of limited time and working from their respective bedrooms, Bri Butler, ‘21, also a computer science major, and her four-person team developed ‘MentAlly,’ an app for white allies who want to check their implicit bias, and connect with other allies for advice.

“I’m most proud of how much my team accomplished in 24 hours. We did a full storyboard and came up with a cool concept for an app,” said Butler, who was most challenged by learning GitHub and XCode on the fly in real time.

“It’s easy to feel isolated as a woman. When we do our weekly workshops, just talking to other girls, about not being as respected, and having imposter syndrome, helps. Having a community makes it really nice.”

It was junior Merrill O'Shaughnessy’s first hackathon too and “a huge learning opportunity” for her. O'Shaughnessy, currently a mechanical engineering major, contributed user interface, or UI, design to her team’s project.

“I had always been confused on how teams could build full products in less than 24-hours. I learned how to prioritize the concepts and features that are most important in order to use the limited time you have for development,” O'Shaughnessy said.

Megan Gendreske, ’21, had a similar learning experience. Her team created an app, Duke Mutual Aid, which allows users to donate money to those in need in real time.

“You can take this super large concept or idea and really break it down to have small achievable goals. For example, I had no idea what software they were using to start, but I was able to figure it out,” Gendreske said. “It was definitely intimidating but it was cool to see how you can just buckle down and figure something out.”

“It was such a great experience to work with people from Duke. We all are interested in similar things,” Cassedy said. “And it’s so empowering to know there are women in the tech world interested in helping us succeed.”

************************************
The Duke Technology Scholars Program (DTech) is a comprehensive effort to empower the next generation of diverse leaders who will bring increased innovation to the tech industry. The program centers around the idea that relationships, mentorship and hands-on experience make the difference in recruiting and retaining such individuals in technology fields.